Sewer pipe blocked the protest but not the mission. 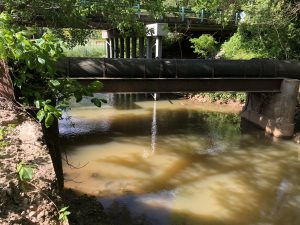 Fifty years ago, a sewer pipe under Woodland Way cut short an idealistic protest. Today, a sewer pipe (above) remains — and the mission of a cleaner Reedy River continues.

The 50th anniversary of Earth Day has prompted deep personal reflection. The first Earth Day marked a turning point in my life that shaped career and personal choices, including attending Deep Springs College prior to Harvard. Among other pursuits, I chaired a Greenville Chamber conference called Balancing Greenville’s Growth (1998), introducing the concept of sustainability to the Upstate. I was also one of the four founding board members when Brad Wyche started Upstate Forever the same year.

I was a sophomore at Greenville High in April 1970. Several friends, including Brad’s sister, decided to canoe down the Reedy River to experience and document the pollution. It had been a wet April like this one, and finding a place to put in was a challenge. We hauled two of the Wyches’ canoes to Cleveland Park, got them in the water, and were carried downstream at a rapid clip. Approaching the Woodland Way bridge, we could see a huge black sewer pipe crossing the river about a foot above water level. Fortunately, we aborted mission (that one, anyway) and got off the water before slamming into the pipe. What a statement!

Lame as the protest was, it ultimately influenced SynTerra. When we worked through the book Good to Great more than 10 years ago, we boldly stated: We can be the best in the world at balancing technical, economic, and social considerations in environmental decisions. That pipe was a stark lesson in the many ways we must balance a wide range of considerations in our work.

Stephen Jay Gould captured the art of balancing in Wonderful Life – a book devoted to exposing the ways that our preconceptions shape our understanding of the world around us:

I strongly reject any conceptual scheme that places our options on a line, and holds that the only alternative to a pair of extreme positions lies somewhere between them. More fruitful perspectives often require that we step off the line to a site outside the dichotomy.

Thankfully, the annoying sewer pipe still carries wastewater across the river, not into it. As a kid, I had to step off Gould’s arbitrary line to understand the unsightly utility of the pipe. And all these years later, the judgment needed to balance competing demands remains a hallmark of the work performed by SynTerra.