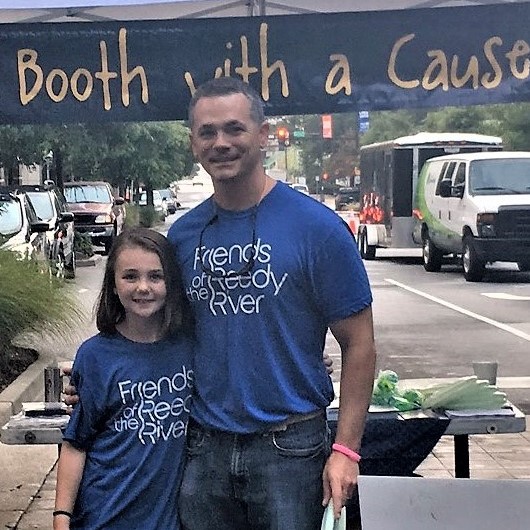 Friends of the Reedy River holds multiple cleanup events like the upcoming Fall Riversweep. The group also is constantly raising awareness. Jason Vaughn, our Director of Client Services, was doing just that — with help from his daughter, Ava — at the Farmer’s Market on a recent Saturday morning.

The Reedy River is integral to the identity of Greenville. It’s the long, flowing, plunging centerpiece of downtown and the crown jewel of Falls Park. But that wasn’t always the case; the Reedy is attractive and cleaner now because people made it that way, chief among them Friends of the Reedy River (FRR).

The group considers the Reedy River a work-in-progress, so FRR holds multiple events to raise awareness. FRR also holds several cleanup events each year, including the upcoming Fall Riversweep, set for Saturday, September 16. Volunteers will remove debris from the river. Turnout matters, so learn more and sign up today.

Lots of Greenville residents remember when the Reedy River wasn’t so pretty and factories along its banks weren’t so careful with their waste. Then, in 1993, Dr. Tom Tiller and Mr. Ben Geer Keys began Friends of the Reedy River, a nonprofit organization dedicated to restoring and protecting the river.  Over the past 24 years, countless volunteers and environmental activists have helped to make the Reedy into a popular showpiece. More importantly, they’ve improved the habitat of plants and animals that make the Reedy River their home.

At SynTerra, health and environmental stewardship come first. We strongly support Friends of the Reedy River, and Jason Vaughn, Director of Client Services here at SynTerra, serves on the group’s board of directors. To him, the September 16 Fall Riversweep is a clear-your-calendar event.