The rise of mass timber construction.

On the face of it, the recently completed 280-foot-tall Mjøstårnet in Brumunddal, Norway, is not really much of an impressive feat. After all, the Empire State Building is more than 1,400 feet tall. And that says nothing of the world’s tallest building, the Burj Khalifa in the United Arab Emirates, which stands at more than 2,700 feet.

But the Mjøstårnet is a standout nonetheless, if only for one simple fact: It was constructed primarily out of wood, or mass timber to be exact.

The Mjøstårnet was made from cross-laminated timber (CLT) and glue-laminated timber (glulam), both of which are engineered wood products that have steel-like strength at far less weight. Think of them as “plywood on steroids” — instead of layers of veneer, they are comprised of layers of lumber resulting in products from a few inches thick to a foot or more thick. Together, CLT and glulam help make tall wood projects like the Mjøstårnet possible. 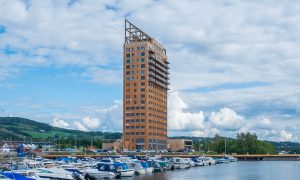 Norway’s wooden wonder isn’t the only high-profile mass timber high-rise to capture the architectural imagination. Before Mjøstårnet, Brock Commons in Vancouver, British Columbia, had the honor of being the tallest wooden building in the world, standing at a height of 174 feet.

But none of those mass timber marvels is as impressive as the planned Atlassian in Sydney, Australia. Rising more than 40 stories, or nearly 600 feet, above the ground and outfitted with glass windows and solar panels, the Atlassian will also feature four staggered stories of outdoor gardens, making it an exciting combination of the industrial and the natural.

If things keep going as they are, we might be entering a bold new age of mass timber dominance in the construction industry. In the U.S. alone, more than 700 mass timber projects were either completed or are on the books as of this March, according to a report from wood construction advocacy group Wood Works.

“Mass timber construction has the potential to revolutionize the building industry,” says Carlton Owen of the U.S. Endowment for Forestry and Communities and a SynTerra board member. “Whereas a concrete building has to have long delays between floors, a mass timber building can go up literally as fast as the components show up.”

Owen adds, “Waste is drastically reduced as all components are produced at the factory, and the product can literally be taken directly from the truck and put in place, without ever being stored on site.”

While few in the construction business would argue that increasing efficiency, cutting construction times, and reducing waste are bad things, mass timber could provide a significant boost to the timber industry. “Mass timber should lead to a resurgence in lumber production that gets the wood market out of its near total reliance on home construction and adds greater balance with commercial and industrial,” Owen says.

Another potential plus: A healthy mass timber industry could lead to a healthier environment.

“Buildings represent about 40 percent of global CO2 emissions. If we don’t build more sustainably, we risk our own future,” Owen says. “Trees and their products are God’s natural CO2 managers. They pull CO2 from the atmosphere and store it, and then when you cut the tree and make long-lived products such as lumber, you store it for decades or centuries while new trees keep the process going.”

He adds, “A piece of wood is 50 percent embedded carbon by weight.” Owen also notes that “steel and concrete produce even more CO2 and aren’t renewable.”

And then there is the matter of aesthetics. Unless you’re a diehard aficionado of brutalism — and there are plenty of those folks out there — most people are drawn to wood.

“People naturally love wood — our furniture, our floors, wooden art, etc. We showcase appearance wood wherever we can. Now, with mass timbers, we can expose wood in even greater ways,” Owen says. “You’ll never see anyone hug a steel or concrete beam.”

For Owen, it’s a case of everything old is new again. “In the past, we built with single mass timbers, such as those that are seen in old buildings with huge beams. With the modern lamination of boards, we can recreate those mass timbers and all of their structural benefits using nature’s only renewable, sustainable building material.” 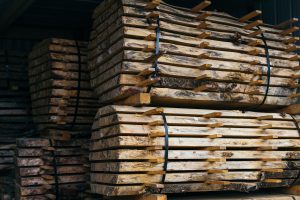 A new era in mass timber could bring changes to the construction industry and the environment.

Projects are sprouting up throughout the U.S. — like the T3 in Minneapolis, Minn., Carbon 12 in Portland, Ore., and two University of Arkansas projects (the Adohi Hall dorms and the Library Storage Building). Owen notes that even retail giant Walmart has embraced mass timber construction at its new, still-under-construction 300-acre corporate campus. Closer to SynTerra’s home base in Greenville, S.C., some notable mass timber projects include the Clemson Outdoor Education Center in Oconee County, S.C., and Continuum in Lake City, S.C.

With all that in mind, Owen sees a promising future for mass timber, especially in North America, which has plenty of forests. “I believe this is the century of forests and forest products,” he says. “We have what the world needs, both in terms of carbon sequestration and modern building materials.”