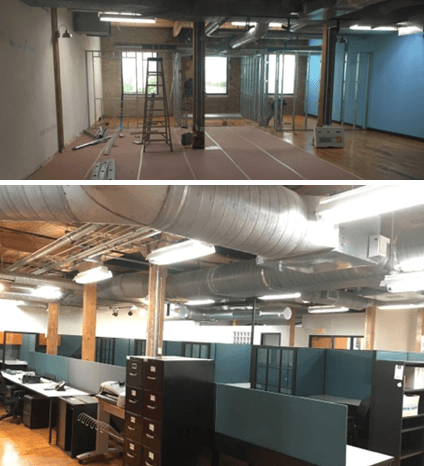 Bustling business and a growing team had us bursting at the seams, so we expanded our Greenville office. The 12 cubicles, three new offices, two additional conference rooms, and a storage area already are fully occupied. We’ve also already filled our new Charlotte office with a group of top experts.

In 2016, SynTerra was identified as one of the 25 Fastest Growing Companies in South Carolina—and there’s been no letup since. In fact, we’ve welcomed 26 new employees in 2017.

We’re thrilled, of course, to have additional business and talented new employees; but, until recently, we were also bursting at the seams. To accommodate both our growing client base and growing staff, we opened a Charlotte office in June. By opening our Charlotte office, we not only got a great new workplace, but SynTerra made itself even more accessible to North Carolina-based clients. Needless to say, our Charlotte-based staff members love it, too.

Meanwhile in South Carolina, we trudged ahead with a major expansion of our headquarters at the Innovate building in downtown Greenville. We just now put the finishing touches on that expansion.

The first step toward accommodating our ever-growing Greenville team occurred in 2016 with the addition of more office space directly beside our existing facility. The construction was completed in late August 2017, and several on the SynTerra team have been making themselves at home in the new space. The 12 cubicles, three new offices, two additional conference rooms, and a storage area are being fully used and enjoyed by our staff.

Steve has practiced comprehensive civil engineering, government relations, and planning since 1983. He has guided numerous projects for public and private clients in the federal, state, regional, and local arenas. Steve, whose core technical expertise is in transportation, has developed business in a broad base of infrastructure – utilities, transportation systems, energy, stormwater management, site development, and recreational/themed facilities.

Among many assignments during almost eight years in the Florida legislature, he served as Chairman of the Energy and Utilities Committee, and ultimately as the GOP Florida House Majority Leader in 2012-2013.

In 2018, he received the Governor A.W. Gilchrist Award, which annually recognizes an engineer for public service, helping mankind, and bringing honor to the engineering profession.

Steve is a licensed Professional Engineer in Florida. He holds a Bachelor of Science degree in Civil Engineering from the University of Florida.