SynTerra president elected to Deep Springs College Board of Trustees

Mark Taylor’s term on the board of the student-owned, ‘cattle ranch’ college begins in July.

In the waning days of his high school years, Mark Taylor faced an unlikely choice: to attend Harvard or Deep Springs College, a little-known school tucked into a valley in the California mountains.

While Harvard was the sensible alternative – one of the most famous colleges in the U.S., if not the world – Deep Springs offered Taylor an education like no other. 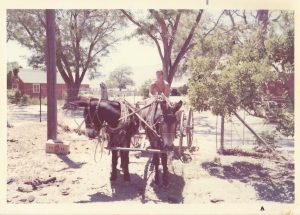 Mark Taylor on a feed run at Deep Springs College

Like Harvard, Taylor’s time at Deep Springs would be marked by intensive studying, challenging lectures, and invigorating discussions, but at the California college, his days would also be filled with the duties that keep a cattle ranch running, from feeding livestock to bucking hay and herding cattle. Yes, the student-run, student-owned Deep Springs was – and is – a cattle ranch.

Ultimately, Taylor chose Deep Springs. That decision opened the eyes of a young man who he says was a “naval-gazing jock” who only thought about himself and his friends.

“There were guys that got up at 4:30 in the morning to go milk,” says Taylor, who today is the president of the Greenville, SC-based science and engineering firm SynTerra. “At one time, I was responsible for 100 chickens.”

Aside from tending the livestock, Taylor also did carpentry work, irrigated alfalfa fields, and washed dishes in the boarding house. “In the third week I was there, I participated in the slaughter of one of the cattle for our food,” he says. “As a kid that grew up in the Greenville suburbs, that was earth-shattering. It really gets your attention.”

Mark Taylor on a feed run at Deep Springs College

Deep Springs was founded more than 100 years ago by L.L. Nunn, an entrepreneur who helped bring hydroelectric power to remote areas in the American West. He had established Telluride House at Cornell University in 1910, but he had little success attracting graduates to the rugged West. The initial goal for Deep Springs was to train engineers to build and operate the plants. Leadership development and community values are vital aspects of the education he envisioned. After operating at several locations, Nunn acquired the Swinging T ranch that would become Deep Springs College, a 50-square mile “campus” in a high desert valley in Inyo County, CA.

Each year, Deep Springs admits a crop of top students from around the world – these days, roughly a dozen are admitted each year – for a free, two-year program that provides a broad and intense education and preparation for a life of service.

For Taylor, who spent a year at Deep Springs before heading back east to enroll in and play football at Harvard, Nunn’s ideals led to service as a founding board member of Upstate Forever in Greenville and a long career as an American Red Cross leadership volunteer. In addition, the SynTerra president and Harvard graduate volunteers with youth and in leadership roles at St. Giles Presbyterian Church.

“I’m deeply grateful for that experience,” Taylor says of his time at Deep Springs.

Unexpectedly, Taylor now has an opportunity to officially express that gratitude. In April, Taylor was elected to join the college’s Board of Trustees; the four-year term starts July 1. 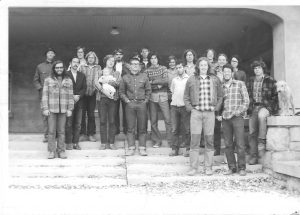 “Much like when I headed west in 1972, it’s difficult to predict what lies ahead. Deep Springs implemented coeducation with the 2018 class, and ensuring its success is a major priority for the Trustees,” Taylor says. “The perennial challenge for the college is to accomplish the essence of Nunn’s vision in a manner that is relevant at the time.”

As a board member, Taylor hopes to illustrate how Deep Springs’ values can help graduates thrive in the private sector. (Many seek careers in the public sector and academia). In fact, he wants to help them understand how the unique educational experience that L.L. Nunn created is “vitally important” to the private sector.

“He understood that the democratic experiment in the U.S. wasn’t certain. It was wildly anomalous and unlikely to survive,” Taylor says about Deep Springs’ founder. “That is what he was after: people who understand that trust is the basis for society and appreciate the importance of our commitments to one another.”