Group brings goodwill and safe water to a remote village in Nicaragua. 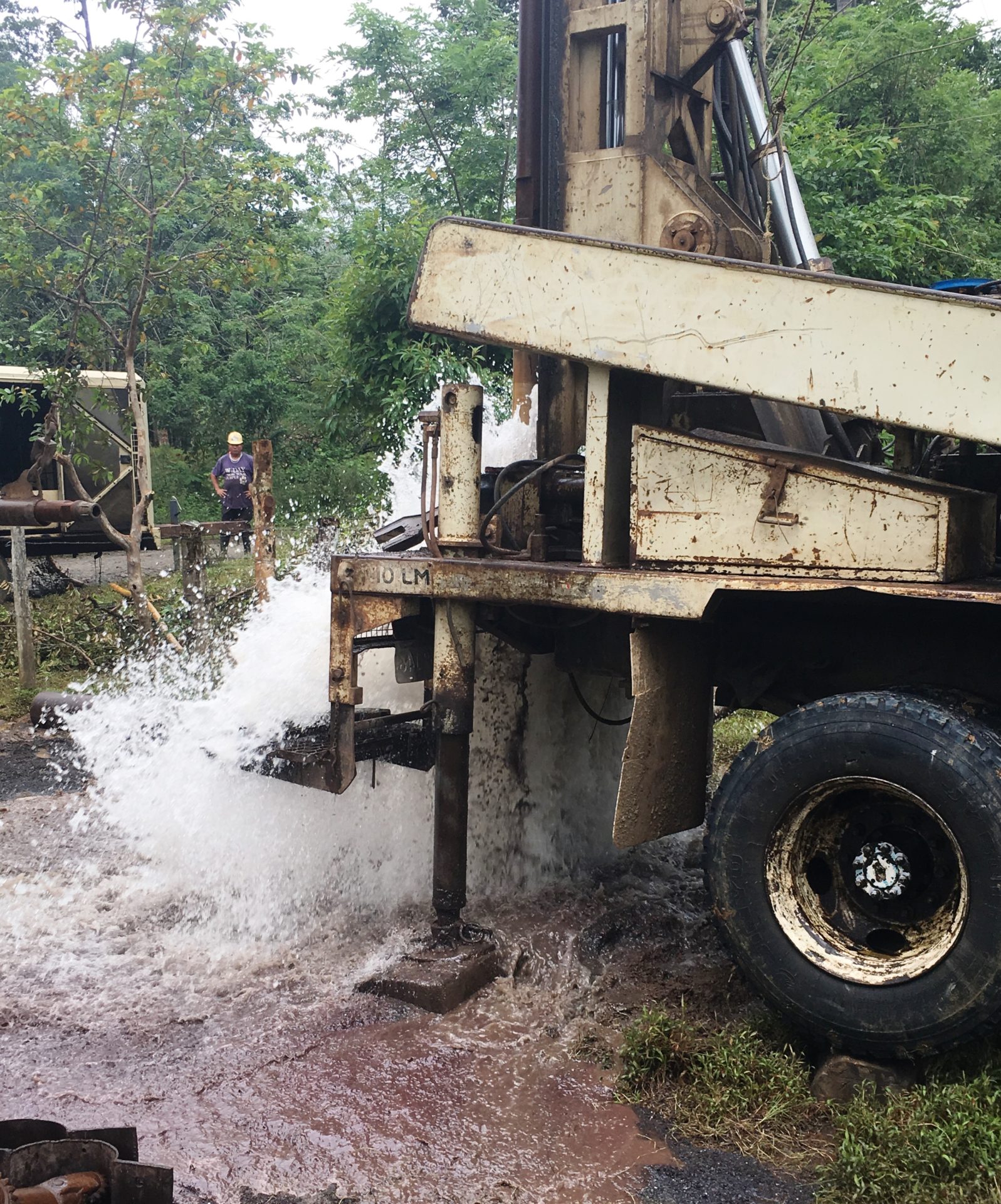 We showed up right before Christmas with a big, loud drill rig — and we started drilling through volcanic ash and rocks. We hit water … lots of water!

My personality color is Red. SynTerra folks know that being a Red is shorthand for being direct and to-the-point. So, let me get to my point: Did you know that more than 800 million people worldwide do not have access to clean water, and more than one-third of the world’s population lacks access to improved sanitation? Those numbers are as true as they are astounding and sad.

Directness is not a trait that the Nicaraguan people are known for. Instead, as a cultural norm, Nicaraguans tend to be very indirect. Interpersonal relationships take time to develop, and decisions are made slowly after much discussion and “getting to know” the other person or people.

You probably feel like you’ve just come into the middle of a conversation, so let me catch you up. During the third week of December, I traveled as a professional mentor to El Serrano, a village in the southeastern portion of Nicaragua, with six Clemson University undergraduate engineering students, representing the Clemson Student Chapter of Engineers Without Borders. These intrepid and committed young people traveled to a poor Central American country, sacrificed the first part of their winter break, sacrificed their time at home with loved ones a week before Christmas, ate strange food, slept on a hard floor under mosquito nets, and had only one or two showers during the week — to do some good in the world.

Check out a Google Earth image of Nicaragua. Look between Lake Nicaragua (that’s the big one) and the Caribbean Sea. What you’ll see is a lot of green. You’ll see lots of tropical forest and lots of hills. Right there in the middle, about an hour and half drive from the nearest sizable town (Nueva Guinea) — along a mud/gravel road in the back of a cattle truck — you will find the several hundred inhabitants of El Serrano. It’s not an important or large village; you won’t find it on many (if any) maps. But, it’s important to the people who live there.

After the civil war that wracked Nicaragua back in the 1970s and 1980s, the government built a water distribution system for the village. Two surface water sources high up in the hills are piped for several kilometers down into the valley where El Serrano sits and up into a large concrete tank. From there, water is directed through a patched-together distribution system to some of the homes.

A weather system thrown out of balance
It’s always hot and humid in this part of the country. During our trip, every day could be counted on for multiple, roughly hour-long episodes of: (1) bright, hot sun; followed by (2) a stiff, cool breeze that brought in dark clouds from the northeast; followed by (3) torrential downpours that lasted from a couple to tens of minutes; followed by (4) bright, hot (now humid) sun; and so on, all day long. The local climate has historically been in balance. There has been a dry season and a wet season; however, over the past few years, something has changed. The dry seasons have gotten longer, and the wet seasons have gotten shorter. Global climate change, coupled with the prevailing El Nino or La Nina weather systems in the Pacific, has thrown the system out of balance. Some dry seasons last longer and are more extreme. Some wet seasons see only a portion of typical rainfall. Reliance for water supply on surface water sources becomes problematic under these unpredictable and volatile conditions. Adding insult to injury is the contribution of an aging infrastructure to a worsening standard of water quality.

So, with about a year of fundraising behind us — and a significant, unexpected gift from my generous colleagues at SynTerra — we hired an in-country professional drilling company and traveled to El Serrano to oversee the drilling and installation (hopefully) of a water supply well. Using a circa 1990s drill rig and a big pneumatic air hammer, we drilled through the volcanic ash and rocks (oh, don’t get me started on the geology!), and we hit water … lots of water! We drilled 248 feet, and our estimates are that the well produces about 50 gallons per minute!

Our work is not done
The trip was a great success, but our work is not done. We now have to work with the village to figure out how best to use and manage the resource. What are our storage options? How does this new supply integrate with the old one? What can we do about the water quality in the existing supply? We have several years of work left for the students and their mentors to figure that out and make it happen. But, for now, we are grateful and proud and excited about the beautiful clean groundwater we found!

On our last evening in El Serrano, we treated our hosts in the community and our drillers to a few cold beverages at the local (and one-and-only) watering hole in town to celebrate the end of a great week of work and success and community building. As we sat around enjoying each other’s company, one of the community members timidly confessed to us that they were astonished the well had been drilled. I asked him what he meant. (Recall what I said about the indirect communication style of the Nicaraguan people? It had taken him an entire week to get around to saying what was on his mind.) He told us that others had promised them help before but no action ever came of it. When we first met community members two years ago for a pre-assessment trip, they didn’t believe anything would be done to help with their water problem. When we returned on two data-gathering trips, they still didn’t believe it. So, when we showed up again, right before Christmas with a big, loud drill rig, and we started drilling rock, and water started blowing up into the air, they finally believed it was happening.

Communities are at the heart of the Engineers Without Borders approach to development. We put engineering and science expertise to work to identify and implement solutions that communities are equipped to maintain for years to come. But, we only do that when we’ve formed a true partnership with a community.

“People don’t care how much you know, until they know how much you care.”
There are millions of people throughout the Earth who lack clean water. But together, we can do something about that. Thanks to the commitment of some of our country’s finest young people, and to the generosity of many — including my colleagues at SynTerra, there are several hundred fine people in Nicaragua who won’t be included among those in the world who lack access to clean water. I look forward to more opportunities to chip away at that total … one village at a time.