During Maris Lawyer’s senior year, the Anderson University student was introduced to a forgotten bit of American history from the late 1800s and early 1900s. 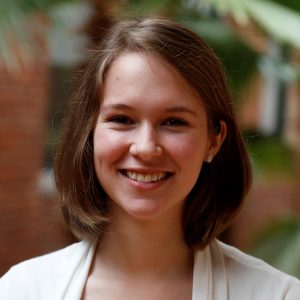 Maris Lawyer’s novel, “The Blue Line Down,” will be published in 2021.

It was a time of unions and union busters. It was a time of tears and triumph, bloodshed and brotherhood. It was the time of the Baldwin-Felts Detective Agency, a privately owned quasi-police force charged with keeping unionized coal miners in line, sometimes by violent means.

Fortunately, those days are long behind us now, and the relationships between miners and their employers today is one of mutual respect, teamwork, and a common goal to work hard and do their best.

When Lawyer first learned of the Baldwin-Felts in an Appalachian Literature class, she had to know more about them. The end result: Lawyer’s debut novel, “The Blue Line Down,” which was selected by the South Carolina Arts Commission, Hub City Press, the College of Charleston, the S.C. State Library, and S.C. Humanities as the winner of the 2020 S.C. Novel Prize.

“I had never heard of the Baldwin-Felts before, and the more I learned, the more shocking it seemed that they weren’t featured in any American History courses I had taken,” says Lawyer, an HR generalist at the Greenville, S.C.-headquartered science and engineering firm SynTerra. “A desire to bring exposure to these characters in history and also explore the struggles of the Appalachian region eventually came together to create ‘The Blue Line Down.’ ”

In some ways, the need to write about that long-ago era, the Baldwin-Felts, and the struggle of the miners of West Virginia was personal.

Lawyer says, “Although we don’t have coal mining here in southern Appalachia, my great-grandparents worked in the textile mills of this region and grew up in similar circumstances. I can remember my great-grandmother talking about coming home with cotton fluff stuck to her hair and clothes, and, up to a certain point, they earned company scrip for wages instead of actual money. It’s not hard to connect the dots and see how these conditions echo all the way down the Appalachian region.”

“The Blue Line Down” tells the story of Jude Washer, a Baldwin-Felts agent who was raised in a mine camp himself. Over the course of the novel, Jude’s concerns about the often-brutal and occasionally lethal tactics of the Baldwin-Felts grow, and he flees the group, with the so-called detective agency not far behind him.

She adds, “Morality sometimes isn’t just a matter of benevolence versus malice; sometimes it’s a question of whether you will take the right action when it’s needed. For most of us, that’s an uncomfortable question to answer, and I think that’s what ultimately — hopefully — makes Jude sympathetic underneath his flaws.”

Stephanie Powell Watts, the judge of the S.C. Novel Prize and the award-winning author of “We Are Taking Only What We Need” and “No One is Coming to Save Us,” noted the relevance of “The Blue Line Down” to audiences today — as well as the work’s attempt to tell a significant part of history.

“Readers are always looking for the topic that both feels familiar until we scratch the surface a little and realize we know almost nothing about it,” Watts says. “In the clear light of the present, movements, protests, and even revolutions of the past can seem obvious and inevitable. History loves to condense the story, connecting dots to make the narrative cohere. However, there is turmoil, angst, and great human suffering in between those dots.”

She adds, “This story shows us how a decent enough person might be compelled to aid and abet bullies and killers. The story also shows us the main character’s remarkable path to possible redemption.”

Kate McMullen, assistant director at the Hub City Writers Project in Spartanburg, S.C., had a similar reaction. “It’s hard not to read the current state of the country into everything I read nowadays, but I hope readers come away with an understanding of how hard it is to go against the mold once you’ve made choices that have backed you into a corner you realize you don’t want to be in,” McMullen says. “Jude’s story is, in fact, pretty remarkable — it’s very hard to tell yourself that you were wrong and even harder to try and make a change.”

“The Blue Line Down” will be published in 2021 by Hub City Press of Spartanburg.